Sometimes you meet clients and you chat and walk away not sure if they will sign, and other times you sit down and chat like old friends and before you walk away everything is signed and ready to go.  I was hired to be their birth photographer with a hint of doula services.  Kenya is a second time mom who had a great first labor and was now looking forward to bringing a second daughter into this world at home with an amazing midwife.

Kenya and Eduardo’s first daughter was born at 42 weeks, everyone knows that one birth is never like another but often we make assumptions.  Assumptions like "if the first was 42 weeks then there is a good chance the second will be too".  So Kenya and Eduardo set their countdown clock to 42 weeks and set in to wait for their beautiful daughter.

We next met up around 36 weeks and did a great maternity session with Kenya, Eduardo and their beautiful little girl.  Kenya’s pregnancy was going great and when most moms are getting tired and looking forward to the end Kenya was just hitting her happy groove.

The night of February 3rd/early morning of the 4th, 5 days before their estimated due date, little Olivia decided enough was enough. Kenya’s water broke and some small contractions started up.  Kenya was able to sleep through the morning and get some rest as things tapered off.  By that afternoon Kenya was hoping things would get moving and headed to the mall to do some walking.  Naomi, (Kenya and Eduardo’s older daughter) loved walking the mall and didn’t want to leave but everyone managed to get home and get Naomi to nap.  By evening, with things still slowly progressing and with Kenya’s water having been broken for a while, she tried some castor oil in hopes of jump starting some real action.

On the morning of Sunday, February 5th, Kenya woke up around 4:30am with some strong contractions that continued to build over the hours.  At 7:23am contractions were every 2-2.5 minutes lasting 50-60 seconds and she asked for me to come join them.

When I arrived at 8am Kenya was laboring beautifully in the shower, thank goodness for hot water on demand as any normal hot water tank would never have lasted.  Eduardo was getting the pool ready while Kenya’s aunt and grandma kept little Naomi busy.  The midwife arrived and then the student midwife.  Things continued to appear to be progressing and Kenya moved from the shower to her bedroom where Eduardo helped Kenya labor and deal with the surges and then Kenya moved to the birth pool.  The second midwife then arrived and everyone was ready for little Olivia to be born.

At 11:35am the midwife checked Kenya to make sure that she was dilated and ready to push… To everyone’s surprise Kenya was 4cm dilated, not the 10 that was expected.  It’s almost like at those words a switch turned off. The contractions stalled.  Kenya got out of the birth pool and sat down for a chat with the midwife.  Her cervix was not in position and she was not as far along as hoped for.  Her water at this point had been broken about 35 hours.  The midwife was unsure if the labor had been potentially just from the castor oil and if so a decision would need to be made.  The worry was that if this wasn’t active labor then there was no way to know when it would start up on its own, and with Kenya’s water ruptured there was always the increasing risk of infection and stress on baby.

By 12pm a rough game plan was decided on, Kenya and Eduardo would nap for a few hours and then head to the hospital to augment labor. The student midwife and second midwife left and Eduardo asked if I wanted to leave and then meet them at the hospital later.  I told him no, I’d like to stay and just hang out then I could follow them there later, I suggested having a talk with Kenya’s belly, to let baby know that they were ready to meet.  Kenya and Eduardo went to their room and had some cuddle time.  They talked to little Olivia and told her they were ready that she was loved.   All of the birth gear was packed up and the midwife laid down for a little rest as well.

At 2:50pm Eduardo let everyone know Kenya’s labor had started up again.  I joined them in her room and took a few more images. The midwife came to check Kenya as she was feeling pushy again and starting to bear down, Kenya was now at 8cm!!

Things happened very quickly at this point.  At 3:26pm between very strong contractions Eduardo helped Kenya get to the birth pool.  All of the midwife gear had been packed up as a transfer to hospital had been expected.  I did my best to help the midwife and put the baby emergency gear back out as I had seen, while taking a few photos and the midwife also got more of the birth gear ready to go.  There wasn’t time though to get everything ready, because at 3:32pm little Olivia was born. One minute she was having a contraction and the next little Olivia's head was out and then the next push she slid into the water and into the midwifes hands.

Almost exactly 4 hours earlier it had looked like Kenya would need to travel to the hospital, but instead little Olivia was born quickly at home just like planned.  It was a beautiful birth and Kenya did so amazing, pushing only a few times to bring little Olivia into this world.  I had many favorite things about this birth.  Kenya’s grandma, her joy at witnessing the birth and her love for her granddaughter and great-granddaughter filled the room. 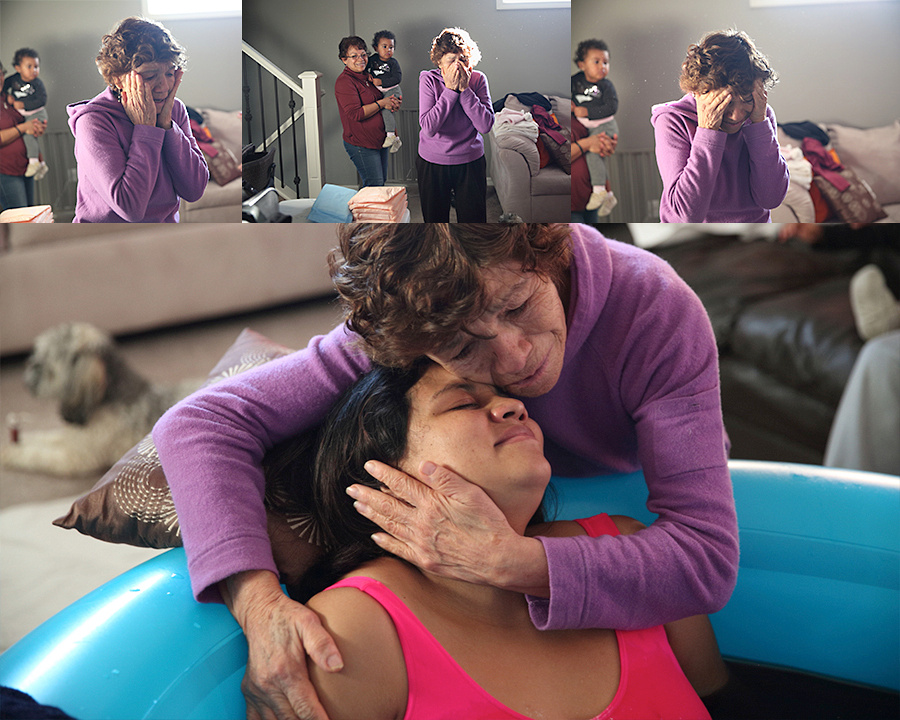 Eduardo’s joy as he met his beautiful second daughter.  Little Naomi’s curiosity as she saw her baby sister.  So much love was present at this birth, and for anyone who’s never witnessed a home-birth it’s hard to explain how calm and peaceful and beautiful it all is even when it's happening quickly. 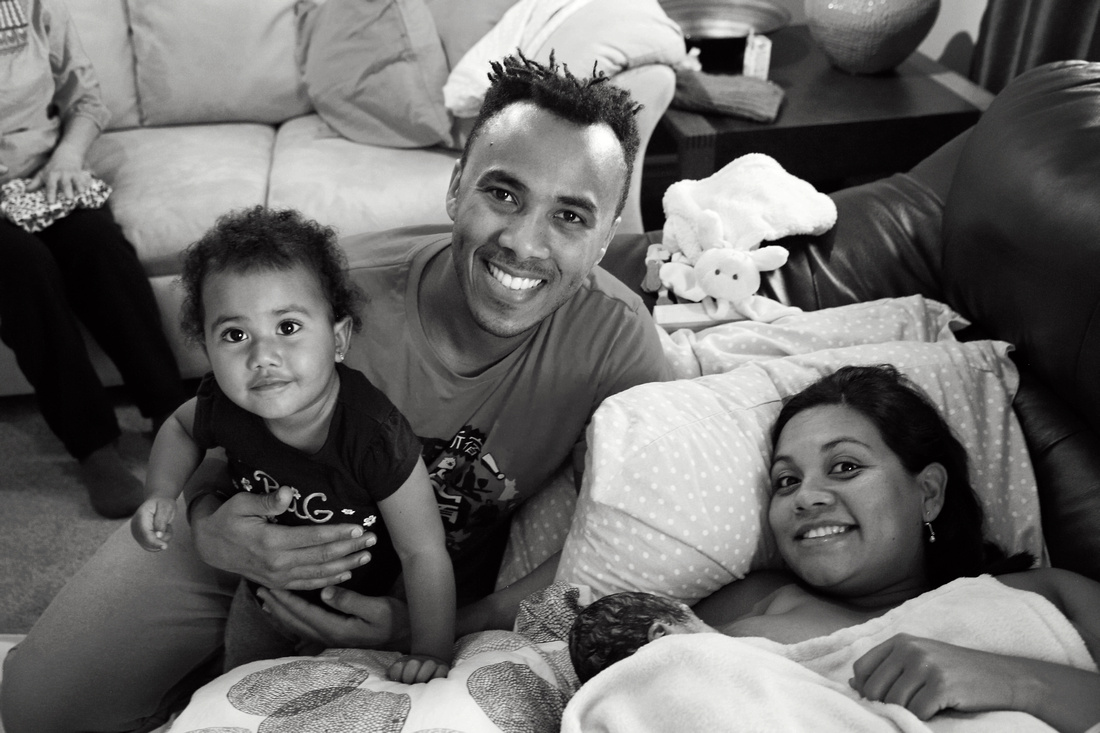 A week after the birth I went back to Kenya and Eduardo’s to capture a lifestyle newborn session.  It was a pleasure meeting little Olivia again and she even smiled while daddy held her.

I hope you enjoy watching Olivia’s birth story, I know I feel honored to have witnessed the amount of love that was present.